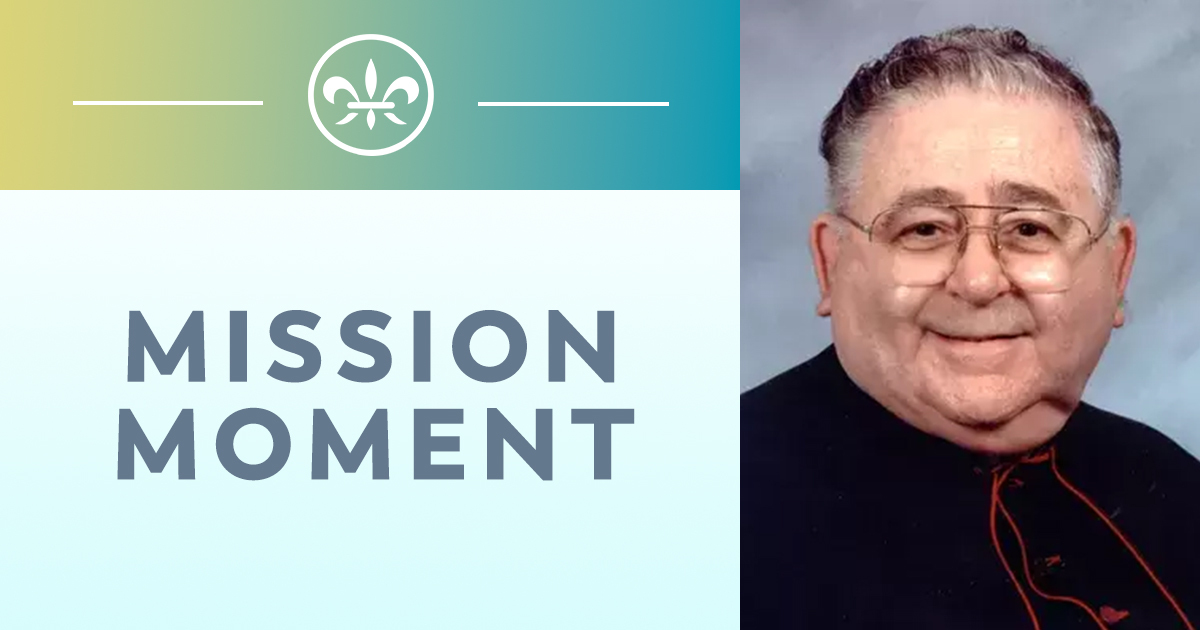 Posted at 11:12h in Mission Moments, News by tessie@white-car.co

A commitment to the priesthood within the Catholic Church is a lifetime’s promise — a giving of one’s whole being, self, and time to the Lord and His flock. But this month’s “Mission Moment” shines a spotlight on a priest in our diocese whose legacy of love and commitment to the church has carried on well past his earthly life — Monsignor Donald Ledet. As this month marks the one-year anniversary of Msgr. Ledet’s passing, we’re looking back at the nearly 45 years he spent within our diocese and how he utilized partnerships during that time to ensure that his legacy would continue long after he had gone to be with Christ in Heaven.

Monsignor Donald Ledet devoted almost 60 years of his life to the priesthood — he was ordained in the Archdiocese of New Orleans at St. Louis Cathedral in May of 1963. In 1977, Msgr. Ledet joined our newly formed Diocese of Houma-Thibodaux where he was first assigned to St. Joseph Church in Thibodaux. Then in 1979, he was appointed as pastor of St. Mary’s Nativity Catholic Church in Raceland, where he remained until his retirement.

Serving as St. Mary’s Nativity Church and school’s pastor for so many years, Msgr. Ledet fell in love with the people of Raceland and the students of the school. This love for St. Mary’s was so strong that Msgr. Ledet took measures to ensure he could continue caring for the people of his parish, even after he had gone.

After Msgr. Ledet passed away last year, his family contacted Fr. Clyde Mahler, the current Pastor of St. Mary’s, and our Catholic Foundation to establish two endowments Msgr. had generously left as gifts for St. Mary’s Nativity! Though we are saddened by his passing and miss him dearly, it is with great honor that our Catholic Foundation is tasked with carrying Msgr. Ledet’s legacy on. His gift, a bequest of more than $300,000 to St. Mary Nativity Church and School, will ensure the good work of the parish and school continues to benefit local families for many years to come.

“In his love of St. Mary’s Nativity Church and School, Msgr. Donald Ledet, not just through his priestly ministry and service at St. Mary’s for many years, but also through a very generous financial endowment gift, desired to give the parish a gift that will continue to give for years to come,” said Fr. Clyde Mahler. “It is a wonderful blessing to know that Msgr. Donald Ledet, in partnership with the Catholic Foundation of South Louisiana, invested an endowment gift in his name to both the parish and the school. He wanted the two entities to receive perpetual support for both the parish and school through his endowed fund with CFSL. We the people of St. Mary’s take pride in feeling and knowing that he loved his worshiping family so very much. We are grateful to Msgr. Ledet, his family and the Catholic Foundation.”

If you’re interested in building upon Monsignor Donald Ledet’s legacy, want to learn more about any of our other established endowments, or would like to learn more about creating your own legacy with the Diocese of Houma-Thibodaux, please contact Catholic Foundation Executive Director, Amy Ponson at aponson@htdiocese.org or by phone at (985) 850-3116.