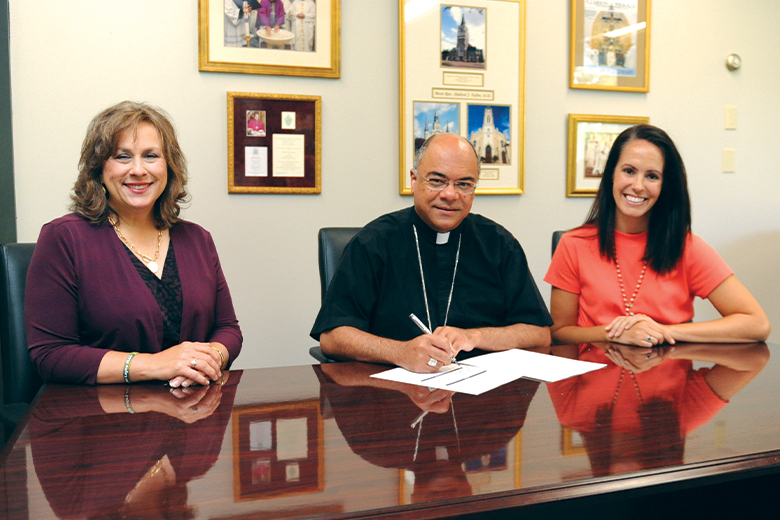 Posted at 12:50h in News by tessie@white-car.co

In response to the diocesan strategic plan for Catholic schools, the U.S. Conference of Catholic Bishops’ (USCCB) pastoral letter against racism, “Open Wide Our Hearts: The Enduring Call to Love,” and a desire to increase diversity in schools, Bishop Shelton J. Fabre has established the St. Augustine Endowment through the Catholic Foundation of South Louisiana to provide tuition assistance for children of color to attend Catholic schools in the Diocese of Houma-Thibodaux.

“The St. Augustine Endowment was established to provide scholarships for children of color to attend Catholic schools in the Diocese of Houma-Thibodaux. One of the greatest graces and gifts of the Universal Catholic Church and our local diocese is the cultural and racial diversity of the faithful,” says Bishop Fabre. “It is my hope that this endowment will assist in increasing the cultural and racial diversity of the Catholic school student population in our diocese, and thus allow our students and the church to reap the rewards of such a grace. St. Augustine, a great theological mind who was born on the northern coast of Africa and served as bishop of Hippo, serves as patron of this fund. I invite others to join in this effort as we celebrate the feast of St. Augustine on Aug. 28.”

Currently the total number of children of color attending Catholic schools in the Diocese of Houma-Thibodaux is 471, which is approximately 10 percent of the total student population.

Bishop Fabre serves as chairman of the U.S. Bishops’ Ad Hoc Committee Against Racism, a committee that was tasked with implementing “Open Wide Our Hearts: The Enduring Call to Love,” a pastoral letter from the full body of bishops to the lay faithful and all people of goodwill addressing the sin of racism. The pastoral letter was promulgated by the USCCB in December 2018.

This pastoral letter states in part, “Racism is a moral problem that requires a moral remedy – a transformation of the human heart – that impels us to act … What is needed and what we are calling for, is a genuine conversion of heart, a conversion that will compel change, and the reform of our institutions and society.”

In addition to establishing the endowment, Bishop Fabre has also instructed the Catholic Schools Office to

“In the USCCB’s pastoral letter against racism, we are all called to ‘walk humbly with God’ as we work to form missionary disciples of Christ in the important ministry of Catholic education in our diocese,” says Suzanne D. Troxclair, diocesan superintendent of Catholic Schools. “This purposeful work of evangelization brings us to action as we implement very intentional practices in our strategic planning for Catholic schools.”

With representation from every school, the Superintendent’s Advisory Committee on Diversity has been established and is already at work to assist in the research and guidance of several plans of action.

“Through Bishop Fabre’s establishment of the St. Augustine Endowment Fund, we will be able to offer financial assistance and afford more students of color the opportunity to enroll in our Catholic schools. Additionally, our schools will further expand their faith formation curriculums with grade-appropriate lessons and activities against the sin of racism that are grounded in the social teachings of the Catholic Church. These lessons will be taught in all schools throughout the diocese. In addition, our diocese is working to further spread the Gospel by seeking ways to increase the number of both children of color, as well as teacher-ministers and administrator-ministers of color in our schools. We are committed to doing the much-needed work of our ministry as we embrace the powerful words of Pope Francis and let no one ‘think that this invitation is not meant for him or her,’” adds Troxclair.

The Catholic Foundation of South Louisiana (CFSL) is managing the endowment funds, explains Amy Ponson, executive director of the Foundation. “Catholic schools will have to apply for a grant through the Foundation. It is estimated that the first distributions will be made to four families who will each receive $500 grants for the 2022-23 school year. As the endowment grows, the number of students who receive the grants will also increase.”

Ponson reports that in addition to Bishop Fabre’s initial contribution, several other donors have already contributed to the endowment, including E.D. White Catholic High School in Thibodaux.